I love designing. I also love reviewing and improving my designs. Seeing what works and what doesn’t. Quite often, what I think is a great idea, my tester (four year old Peter) will disagree and offer up ideas for improvements!

This week, I thought I would share with you the inspiration behind the current designs.

By now you should probably know (if you hadn’t guessed by the title), that this was based on my first PlayBag design. It wasn’t intended to be complicated. I just knew that it had to have a road, a bridge and a river. I also wanted these to flow off the mat so that the cars and boats or whatever, were not limited to just the mat. The Helipad also added in the extra value that other vehicles (not necessarily a helicopter) could land in. We have had all sorts land there! Also plenty creatures need rescuing from the little island.

The only things that have changed from this basic design are the colours and materials.

I designed this PlayBag while Peter was going through a bit of an Octonauts phase so it had to have plenty of water! I love bridges so that was a given - I just think they add so much to the play mat as not only can things drive under or over, they also make good hiding places! The Beach bag also has a little cave for creatures to hide in.

Not too much has changed from the original prototype. Again, materials have changed and the bridge and cave are made of sturdier stuff! Also the size of the road and stream are standardised so that they can interact with other PlayBags.

Peter has a little bit of an obsession lining things up in a neat line, which is where the idea for this play mat came from. We liked the idea that the vehicles could have somewhere to rest while the others were busy racing around the play mat!

This one also underwent a severe redesign after Peter decided it would be more fun if the bridge went over the road. The original design also had a drawbridge over the river, but my biggest critic did not like this idea at all and insisted that a second bridge over the river would be a much better idea.

This has probably been my favourite so far. I actually designed this to appeal more to the girls, however, you can’t generalise and it has been Peters favourite. (Until the Story Time one arrived that is!!). The over/under road means that you can have plenty vehicles going in all sorts of directions at once, which makes for awesome races! I also love the long grassy area – its’ so fluffy! 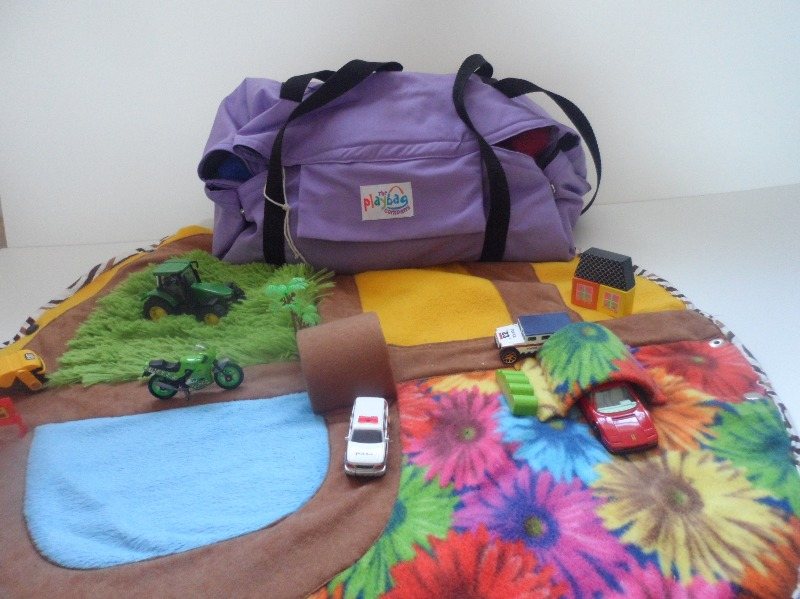 For this design, our main aim was to have something that was colourful and tactile. I had a lovely time choosing the softest fabrics I could find. We also decided that the layout should be fairly simple, but still pleasing to the eye. It was also designed to be practical for parents with double pockets for essentials. See the Blog "Introducing the PlayBag Baby" for more details.

Although not officially released yet as it is still undergoing some serious “testing”, it should be on the shelves by July! This bag was inspired by the super popular children’s book “The Gruffalo” by Julia Donaldson. As a bonus, I also managed to find some finger puppets which are a perfect size to go with this PlayBag, and Peter has been having a lovely time re-enacting the story.

Now, you know I don’t like limits, so don’t feel that this PlayBag is limited to one story. It has plenty scope for the re telling of plenty other stories, or just for general play as it has the usual PlayBag features of a bridge, cave and stream.

All the PlayBags, with the exception of “Baby” were also designed to work together, so the streams and roads are of a standard size so that they can link in any number of combinations, either by road or stream or both…..

Oh yes, and one day I may think up some more imaginative titles for the different PlayBag designs, If you have any suggestions, please do leave a comment!